The HIROX Hiscope is a dedicated digital microscope, that is, there is no provision to observe the sample directly through the lens except with a digital camera.

Once that design decision had been made the system was optimized for the characteristics of the imaging sensor – a flat, 2-D array with a known readout rate, response curve, pixel size, etc.

In a conventional microscope the optics of the eye have to be figured into the design parameters and that requirement may be different from and potentially conflict with those that would produce optimal images with an electronic imaging sensor.

Because the HiScope has been designed only for digital imaging no compromises have had to be made to accommodate the eye’s optics. However, the system is, in fact, often able to take advantage of sight physiology and visual signal processing to provide unique observational capabilities, i.e. 3-D Rotational Microscopy.

Q2: Advantages of a digital microscope?

Many of the advantages of a digital microscope are related just to the digital output itself.
For one, since the image is presented on a monitor everyone sees the same thing at the same time. No more trying to describe the small defect in the upper left corner of the field of view or hoping that the next person looking through the microscope is not just seeing their eyelashes: The image can be immediately processed, captured, stored, measured and reviewed.

The processing can not only enhance the image quality but can also do such things as extend the Depth of Field (DoF – the amount of the depth in the image that is in sharp focus) by blending in focus information from several image planes.

But there are other advantages that come from the design directly: One notable quality of some of the lenses is their unusually large DoF. The DoF is several times that of a conventional or stereomicroscope at the same magnification – often millimeters rather than micrometers! Other advantages include unique lighting regimes and observational capabilities like dynamic oblique viewing not available in conventional microscope even if they have video capabilities.

Q3: What about magnification?

With digital microscopy it is really more relevant to talk about Field of View (FOV) rather than magnification – a 500-micrometer sample viewed on a 15″ computer display is much lower “mag” than the same sample viewed on a large screen with a video projector.

The HiScope nominal magnifications are given for display on a standard 15″ computer monitor. Table 1 gives a range of FOV for different magnifications.

Q4: What is the Field-of-View per magnification? 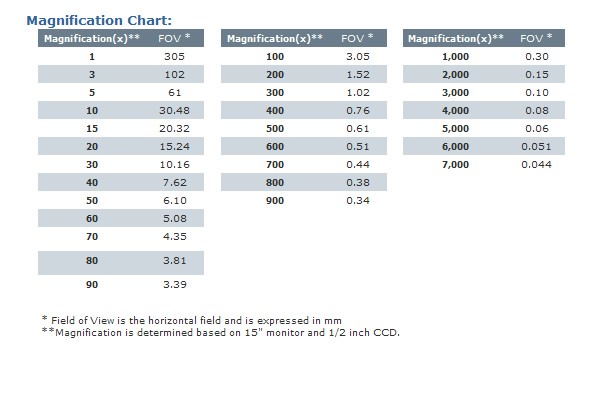 The choice of an analog video camera or digital one comes down to three main factors – display refresh rate, compatibility and cost.

Since microscopy is highly interactive, it is important to have the human interface to be as close to “realtime” as possible. “Realtime” has come to mean 25 to 30 frames per second (even motion pictures are 24 frame per second). The number is related to visual physiology – the critical flicker rate, the rate above which the image is perceived as being continuously presented.

Until quite recently, only true analog video cameras were capable of presenting data that quickly. NTSC analog video, when digitized is almost 30MB per second. Since the video standards are so widely accepted it is a simple matter to find compatible hardware a situation that does not yet exist in the digital image world where many imaging devices use interfaces that are far less common.

Except for the NTSC/PAL dichotomy, a video recording made on one machine is certain to play on any other comparable machine. Until quite recently, digital cameras with a resolution higher than analog video (640×480) that had a 30 frame per second output were quite expensive.

Our Hirox KH-1300/7700 units, however have overcome many of the limitation previously encountered in streaming digital imaging. With a standard UXGA (1600×1200) output, the camera can plug directly into a high resolution computer monitor.
What’s more, with new pixel shifting technology the field of view can be sub-pixel sampled to give images with 30 million pixels.

Even recording streaming digital signals is now a simple matter with the latest compression codecs.

Q6: What about system resolution?

Resolution in a digital microscope system can refer to several very different things. This is unfortunate because of the confusion the question of “what is the resolution?” brings.

First to consider: the resolution of the camera itself. This is sometimes expressed as some number of lines, i.e. 800 lines resolution, or given as the number of pixels in the camera array, i.e. 1600×1200. For line resolution the measurement is for the number of black and white line pairs that could be resolved if the central, highest resolution portion of the display were extended across the whole screen.

Pretty esoteric stuff since few people look at vertical black and white lines. The number is, though, a relative indication of how sharp the image will be – the higher the number the sharper the image that the camera is capable of producing. The case with high resolution digital cameras is almost straight forward since here all the pixels count- well most of them do anyway.

A camera with 1600×1200 sensor elements will make an image with 1600×1200 pixels. There is a little fudging because of the way the color is derived (demosaicing), but that is another, also somewhat complicated story. With the pixel shifted image however there is none of the demosaicing and each pixel really sees a red and blue and green signal – almost as if it were a 3 three chip camera.

Now to the microscope resolution part of the question:

Because the microscope has a zoom capability and can magnify an object to different sizes, the resolution will be dependent on both the magnification and the resolving power of the lens. The resolution of lenses is ultimately dependent on the wavelength of light – in air you simply cannot see anything below about half the wavelength of the illuminating light no matter how good the lens is or how much it will magnify.

Without getting too technical, the theoretical limit is about .33 micrometer laterally and about 1 micrometer vertically but the practical limit is usually a little higher, perhaps closer to 1 micrometer in the X/Y and 5 micrometers or more in the Z for lower magnification lenses.

In a perfect world, that would mean you need a minimum magnification of roughly 300x to be able to just resolve two 1-micrometer objects. In practical terms, samples rarely have the extreme contrast or other physical and optical properties necessary to allow that resolution at that magnification.

There is also the distinction that needs to be made between resolving, which is more of a theoretical exercise, and in being able to “see” the resolution. Sampling theory and optical physics define the resolving power of the system but, in practical terms, the magnification needs to be probably three to five times or more higher than theory would predict in order to have enough information in the image to actually “see” the resolution.

Higher magnification is indeed empty magnification but at least you will have the image spread across enough pixels to allow you to visually distinguish between adjacent objects.

We use cookies on our website to give you the most relevant experience by remembering your preferences and repeat visits. By clicking “Accept All”, you consent to the use of ALL the cookies. However, you may visit "Cookie Settings" to provide a controlled consent.
Cookie SettingsAccept All
Manage consent

This website uses cookies to improve your experience while you navigate through the website. Out of these, the cookies that are categorized as necessary are stored on your browser as they are essential for the working of basic functionalities of the website. We also use third-party cookies that help us analyze and understand how you use this website. These cookies will be stored in your browser only with your consent. You also have the option to opt-out of these cookies. But opting out of some of these cookies may affect your browsing experience.
Necessary Always Enabled
Necessary cookies are absolutely essential for the website to function properly. These cookies ensure basic functionalities and security features of the website, anonymously.
Functional
Functional cookies help to perform certain functionalities like sharing the content of the website on social media platforms, collect feedbacks, and other third-party features.
Performance
Performance cookies are used to understand and analyze the key performance indexes of the website which helps in delivering a better user experience for the visitors.
Analytics
Analytical cookies are used to understand how visitors interact with the website. These cookies help provide information on metrics the number of visitors, bounce rate, traffic source, etc.
Advertisement
Advertisement cookies are used to provide visitors with relevant ads and marketing campaigns. These cookies track visitors across websites and collect information to provide customized ads.
Others
Other uncategorized cookies are those that are being analyzed and have not been classified into a category as yet.
SAVE & ACCEPT